The Story of the Rock Caricatures 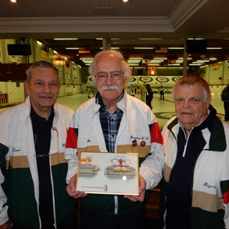 The photo from left to right is: David Laferle, Herb Kucera, John Mardon

When John Mardon joined the Bayview CC , and as part of the introduction of new members, it was revealed that John was an artist – a professional artist. Dave Laferle, a member at Bayview CC went over to John’s table and welcomed him to the club. David was also a member of the Grandmasters executive committee and in the conversation asked John to do a poster for us – something light hearted. John picked up a piece of paper and pencil to draw. Across the table was Herb Kucera; Herb became the model and for posterity we have Herb’s caricature on the Grandmasters rock. In 2015 a female rock was added to our collection – as yet nameless. Thank you, John, for your wonderfully artistic and fun rocks to characterize the Ontario Grandmasters Curling Association , its competitors and its competitions. We are so appreciative of your work.