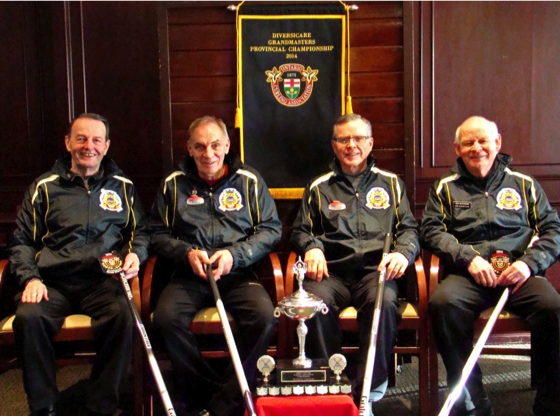 The Provincial Grandmasters Curling Championship were held recently and Misssissaugas’ Squad from the Dixie Curling Club were crowned this years Champions. Bob Edmondson 70, Ron Nayduk, 70 , Mike Skafel 73 Rick Buchanan, 70. Fifty eight teams entered from across Southern Ontario, and started elimination playdowns in December.   The 16 finalists were hosted at the Thornhill Golf and Country Club on March 20_22, 2014 for the Championship Finals. In a thrilling final game, the Edmondson team managed to squeeze past with his team from the Curling club. During the Banquet ceremonies on Friday night, Grandmasters’ Chairman Art Lobel was especially appreciative of the long-term sponsorship from the Diversicare group (retirement living), and from the secondary sponsor Senior Moving Services Inc. He also mentioned that the Grandmasters curling competition was thriving, with the number of entries increasing each year. This was the 8th annual edition of the event.   This is the third Provincial Grandmasters Championship won by the Dixie Curling club, twice previously by Peter Barker and his squad, Bob Wilson, Glenn Rowett and Eldon McFadyen and Edmondson’s first win of the Grandmasters. Prior to that, Edmondson has won one Canadian and five Provincial Championships at the Masters level. Nayduk has participated in four previous Provincials and won the 2010 Masters Double Championship. This is Skafels second appearance at the Grandmasters and has previously won two Provincial Masters Titles. This is Rick Buchanan’s first time out in the Provincials and first Provincial Championship. The Grandmasters Curling competition is open to men and women 70 years of age and older residing in the Province of Ontario. Past winners and more information can be found at www.grandmasterscurling.com. This event is recognized by the Ontario Curling Association (OCA), and OCA official Lynn Anderson was on hand to assist Diversicare President Paul Richardson with the presentation of the Championship Banner.