The 2013/2014 Ontario Grand Masters Curling Championship for curlers 70 and over was held at Thornhill Golf and Country Club on March 20, 21 and 22. After a dinner, held for the 16 Zone Winners, sponsors, committee members and guests, a special presentation was made by Art Lobel, President of the Organizing Committee, to Peter Barker. The presentation was in recognition of Peter’s service as an Executive Member of the committee from the inaugural year 2007 until 2013.

In addition, a very sincere congratulations goes out to Bob Edmondson and his 2014 championship team (photo below) of Ron Nayduk, Michael Skafel and Rick Buchanan, who went undefeated for the event. We look forward to seeing the Championship Banner hanging on the wall at Dixie. 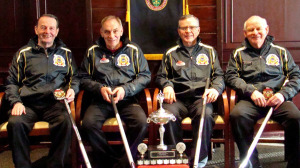